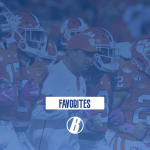 There are more big games this week after an electric start to the season, and we’ve picked out the games between Coastal Carolina and Georgia State, Clemson and Wake Forest as well as Nevada Wolf Pack and Air Force Falcons as the ones to watch.

We’ll break down each game and provide you with our best betting NCAAF picks to see if we can earn you some extra cash for the weekend.

Learn more about how to bet on NCAAF here.

It’s been a horrendous start to the season for the Panthers, with Georgia State going 0-3 in their opening three games.

Their opening game was on the road against South Carolina Gamecocks where they got blown away in a 35-14 defeat, before back-to-back home defeats against North Carolina Tar Heels (28-35) and then Charlotte 49ers most recently (41-42).

Coastal on the other hand have had the complete opposite experience, going 3-0 in their opening rounds and asserting themselves as one of the favorites going forward.

They dominated the Army Black Knights in the opening weekend with a 38-28 win, before claiming a 31-27 win over Gardner-Webb Runnin’ Bulldogs and then a 38-26 win over Buffalo Bulls. This will be their first road trip of the season.

Carolina to cover the spread

The difference is on defense, where Coastal Carolina allows only 3.2 yards per carry and Georgia State allows 3.7.

Against a run-heavy Army team, Coastal won 38-28 as 1.5-point favorites. Considering their play styles and respective records this season it’s hard not to see a similar result here and with the handicap set a -2.5 they’re a solid value bet.

Check out our review for BetUS sports betting here.

It’s been a picture-esque start to the season for Clemson, with three consecutive blowout victories.

They opened their season with a 41-10 win on the road against Georgia Tech Yellow Jackets, before a 35-12 home win over Furman Paladins and a 48-20 win over Louisiana Tech Bulldogs most recently.

Wake Forest have had a flawless start to their season too going 3-0 also, although they weren’t as convincing last week as they have been.

Their first game ended with a 44-10 win over VMI Keydets before a 45-25 win on the road against Vanderbilt Commodores. Last week though, they were pushed to the limit by Liberty Flames as they came out as 37-36 winners thanks to a fourth-quarter comeback.

The only game that I think is a true steal this weekend is between Clemson and Wake Forest.

What is noteworthy is that Wake Forest only won 37-36 last weekend against Liberty after stopping a two-point conversion. If Liberty went for the extra kick and then won in overtime, Clemson would likely be a larger favorite going into this weekend.

The Tigers, like the Demon Deacons, have only played against teams they were supposed to beat comfortably, but based on their past track record of success, they shouldn’t have any trouble beating Wake Forest.

Betting Clemson at -7 points right now is the best play to make as 7.5% of CFB games are decided by exactly seven points.

If this line moves, which I suspect it will, this will give you great closing line value as a bettor. This is a good spot for betting on a Clemson team that is rarely favored by single digits, so take this bet and take their spread up to -9.5.

Nevada have had a mixed start to their season as they’ve gone 2-2 in their first four games, with a humiliating result last weekend.

Wolf Pack beat the New Mexico State Aggies 23-12 in their opening game before a 38-14 win over Texas State Bobcats immediately after.

But their last two games saw defeats against the Incarnate Word Cardinals (41-55) and then an embarrassing 27-0 thumping by Iowa Hawkeyes.

As for Air Force, they smashed Northern Iowa Panthers 48-17 in their first game of the season and followed that up with a dominant 41-10 win over the Colorado Buffaloes right after.

Last time out though they were beaten by the Wyoming Cowboys 17-14 in a close encounter.

For the Mountain West Conference affair between Nevada and Air Force, I expect a low-scoring game that goes Under the 49.5-point total.

Last week, Air Force lost 17-14 as a 16.5-point favorite against a similar conference opponent in Wyoming when the total was set at 47 points.

What makes Nevada similar to Wyoming is that they are not that good at scoring, and occasionally, their defense is capable of frustrating decent offensive lineups. The only time the defense let them down this season was in a fluke game against the Incarnate Word Cardinals.

Air Force, despite its name, has a run-heavy offense. The Wolfpack allow only 2.8 yards per carry, which is ranked at 21st in the country. I expect the Falcons to win, but it might not be the ugly blowout that we are expecting.